It’s easy to move to an EFT payment.   You can do this online at GM NetBenefits®.   Simply go to the Savings and Retirement section and choose Direct Deposit.   You will need to know the name of your bank, what type of an account (savings/checking), your account number and the bank’s routing number.

The benefits of EFT are many: First, your pension benefit will be available to you on the first business day of the month.   No more waiting for the mail to be delivered!    You can be assured you will receive your benefits on time each month. You will receive a confirmation that your payment has been deposited to your chosen account.

Davis Vision now has a brand new app to make sure your benefit details are as mobile as you are!

You can also try on over 200 brand-name frames from the comfort of your own home by visiting trydv.davisvision.com or by scanning the QR code below.

It has come to our attention that many UAW represented GM retirees have moved and have not updated their mailing address with General Motors.  It is important all retirees maintain a current address with the company to receive important communications, such as tax information, information regarding benefits, etc.

All changes must be updated to keep files current.

How you and your negotiated legal services plan can fix credit reporting and billing errors.

➢ Identity theft, hacking of personal financial information, online scams – every day we hear of new attacks on our financial future. Each of us needs to know how to use the tools available to protect our financial lives.

➢This webinar will help you to learn how to fix scams and errors on your credit report or your credit card bill.  You will also learn how your legal services plan can help when you are confronted with consumer credit issues.

Where:  Attend online or by phone

Sign up: Call 1-800-482-7700 and ask to enroll in the Credit Protection Webinar. You will be sent an online link for computer access or, if desired, a webinar phone number for listening in.

Note: This Webinar is available only to UAW members and Surviving Spouses who are eligible for the legal services plan.  It is the first in a series

that will explore legal issues covered by the plan.

Below is the letter for the 2018 Performance Bonus payment.

Eligibility date of May 15, 2018 and all requirements are outlined in paragraph 99(a) of the UAW-GM 2015 National Agreement.

If you have any questions on this, please contact your local union leadership. 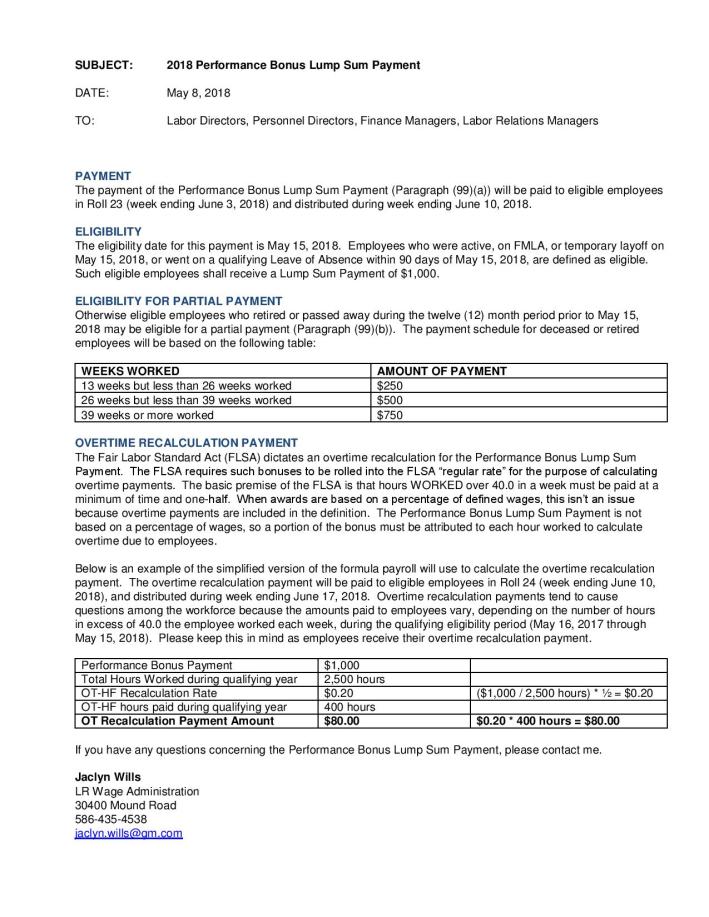 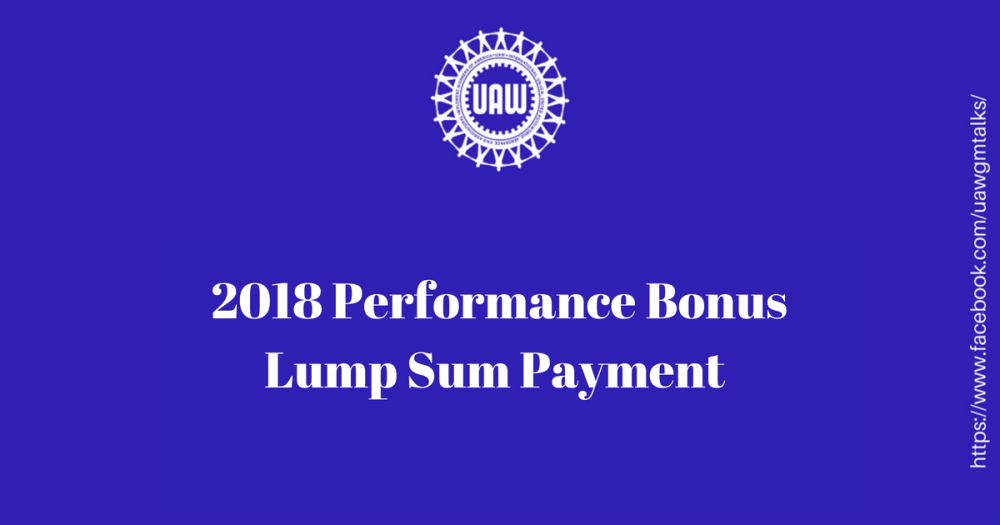 Employee Placement is provided under Appendix A of the 2015 UAW GM National Agreement. Members who desire to move to other locations can sign onto UAW GM JAS website https://www.uawgmjas.org/j/ and select Employee Placement to fill out an application to transfer. Our primary focus is to relocate those members who are currently laid off. Most of these layoffs were the result of a loss of volume in our car plants.

The UAW, International GM Department, Regional Offices and Local Unions, are constantly reviewing the needs of all the locals and pressuring the company to hire permanent members when there is a need. We will continue do our best to relocate all our laid off members and offer members who desire a transfer a chance to transfer to another facility.

So far this year, 477 members have been transferred to other locations. Since the ratification of the 2015 UAW GM National Agreement 3,437 members have transferred to a new location. Under the 2015 Agreement, all production members who have at least two years seniority or are from a plant with excess can apply to transfer. (This was not the case in previous agreements.) Due to this new language in the National Agreement, 1,417 In-Progression members have been able to transfer to a desired location.

If you have any questions on Appendix A, please contact your Local Union Representatives. 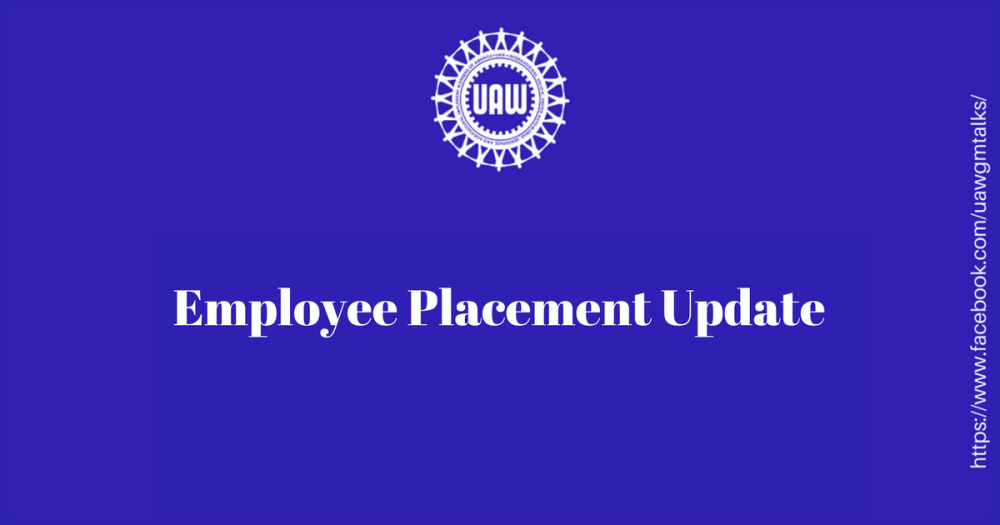 This year UAW and GM are asking each facility to observe Workers’ Memorial Day on Friday, April 27, 2018.  The purpose of this day is to honor the memory of workers who have either lost their lives or have been injured from work-related incidents.  It is also an opportunity to promote and heighten the awareness of safety inside and outside the workplace.

Looking for UAW related information or resources? Check out the flyer below to use as a reference sheet for ways to get connected!

You deserve to know the facts about recent outsourcing at Local 5960 Lake Orion and Local 1112 Lordstown. This was a decision agreed to by the involved local, regional, and national leadership. Everyone agrees that this situation sucks. But what would suck even more would be to have GM shut down any of our plants and devastate hundreds of our members’ lives and the communities where those plants exist. These are the facts.

Due to these conditions, GM recently came to us to consider changes at the small car plants that would make them more competitive – which means keeping jobs in our plants. Due to GM’s track record in plant closings, we met with the Company to look at vehicle content, marketing, suppliers and labor.

For Lordstown, local leadership and management came to Detroit, and with the region and national parties, an agreement was negotiated to make changes that we believe will put the plant in a better position to stay open.

Yes, the MOUs make changes that impact some jobs that our traditional members perform. But the local, region and International agreed that we needed to keep product in our plants. And in the case of Lake Orion, we needed to get future technology into a UAW GM plant – and we did.

GM would like to walk away from the UAW, shut down our plants and move work and future technology to cheaper locations outside the U.S. – which GM’s competitors are already doing. We pushed hard against the bigger changes GM wanted and entered into an agreement that we feel will result in the long-term job security of our members and communities.

We need a united membership to keep pushing back against GM, because when GM sees division, they exploit it. We fight this Company every day and I can promise you that we are going to keep fighting and share our work with you so that you have an accurate picture of what is going on in the run up to 2019 bargaining. 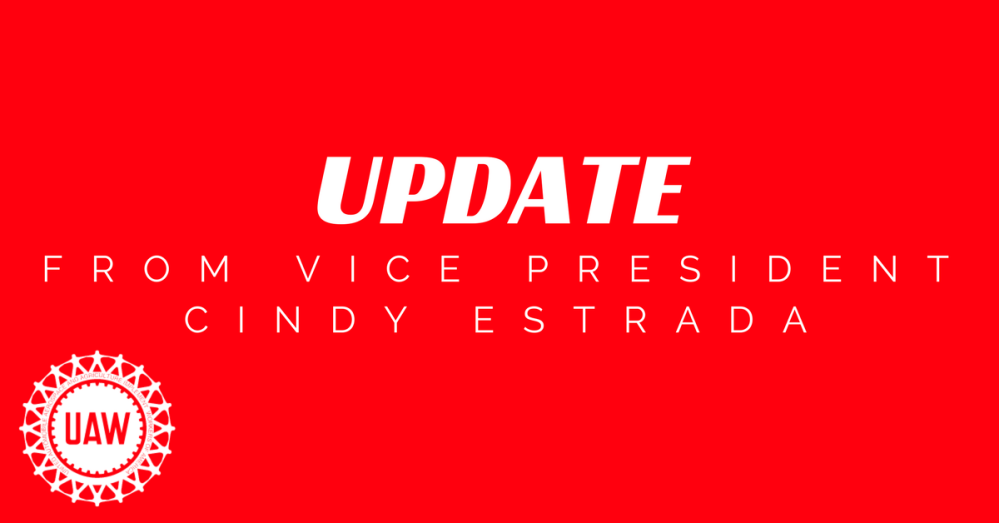 This week, over 75 new apprentice offers have been made in 17 UAW-GM Locals throughout the country.  The assignment of the new apprentices is consistent with agreements made during 2015 National Bargaining.  These newly indentured Apprenticeships will consist of 49 Electricians, 21 Diemakers and 9 Engineering apprentices and are made up of UAW-GM seniority employees, UAW-GM temporary employees and U.S. Military Veteran candidates.

As this new generation of skilled trades begins their journey, many changes and updates are being undertaken to ensure that their training experience solidifies their future. A new technical training suite and curriculum are being installed in the UAW-GM Center for Human Resources in Detroit. The technical suite will ensure that our tradepersons have the skills and abilities to launch and maintain the advanced manufacturing systems needed to build the highest quality cars and trucks.