By Bruce A. Miller

The leadership of the UAW, led by Dennis Williams, it’s President, concluded an historic collective bargaining agreement with FCA (Chrysler). The union, struggling to catch up from the effect of concessions that assured the continuation of the corporation, won signifcant wage increases across the board, narrowed the gap between tiered pay scales and introduced an innovating health insurance plant to improve services and cut down employee and corporate costs. It was a good settlement. But was it good enough?

In the UAW the workers have the last word on the important decisions that affect their lives in the workplace. The leadership leads but it does not dictate. And they would not have it any other way.  Membership control over the union has been the UAW way ever since its beginnings. So, the workers of FCA, blue collar and white collar, skilled and assembly, all have the last word. And that is what is going on right now.

There is a debate going on in the membership over whether or not the contract settlement gets them whre they want to go. That debate will be settled the democratic way, the American way, the UAW way. It will be settled by a vote. Preliminary reports indicate that the members may turn it down. When they turn it down the leadership is mandated to return to the bargaining table and either do better or shut the company down in a strike that will conclude with a better bargain. Outsiders who view the division in the ranks of the union may wrongly conclude that the union is weakened by division and cannot defend itself.  They just don’t understand how the UAW works.

In the approximately 54 years I have practiced labor law and been an observer and participant in the life of the UAW I have seen major changes in the auto industry. You can’t go through the threat of extinction, bankruptcies and major changes in how cars are made without those changes complicating collective bargaining. And, during this same time the union has gone through the crisis of division that always ended up in the victory of unison. The members of the UAW understand, and it is part of their history, that they can disagree passionately among themselves but when the vital interests of the union are at stake they come together.

A case in point is World Socialist Web Site published by a tiny organization with virtually no membership, which accuses the UAW of selling out it’s members with the contract settlement. How the union leadership sells out its members by providing for the members to vote on the settlement and reject or accept it is not explained.

Who are these “friends” of the autoworkers? To give it a flavor, they devote their publication to the murder of Leon Trotsky, a side kick of V.I. Lenin. This is what they say:” The assassination of the greatest leader of the 1917 October Revolution marked the climax of the Stalinist Regime’s eradication of the socialist workers and intellectuals who had secured the victory of the Bolshevik Revolution.” Just what the workers at FCA need – a new Bolshevik revolution and a leader like the Russian Leon Trotsky! These folks want to see turmoil in the UAW because it is out of turmoil they hope a new revolution will come. And when that revolution comes these folks will lead everyone to the socialist paradise that was the Soviet Union when Lenin and Trotsky were around. FCA workers need this like a hole in the head!

The interesting thing about the right wing vultures is that they both are against the union and use the same language in describing its democratically elected leaders as “bosses.”

Walter Reuther had it right. It was said, he used to say when I am attacked on the left by the Communists and on the Right by the bosses, I know I am doing the right thing going down the middle with the members. And that is what this UAW leadership is going to do.

In the UAW it is the members who decide the conditions under which they work. Certainly not the outside vultures on the right or the left. 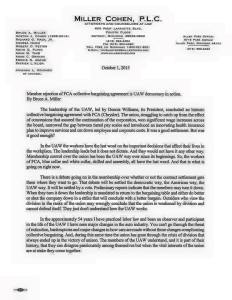